Yonge and Eglinton area in Toronto has long been famous for having lots of pigeons. This bank just north of Eglinton is one of the greatest failed bird control jobs I’ve ever seen. Not quite sure who did this work, but these kinds of jobs are the reason why many property owners and managers distrust the work we do and products we use, such as bird netting and bird spikes. 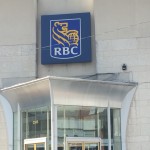 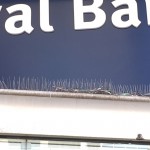 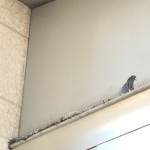 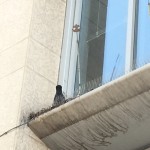 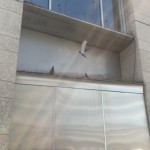 On these photos we can clearly see at least three separate attempts to resolve the pigeon problem on the entrance roof and building ledge. Even after three different products installed the problem still isn’t solved. At this point we have to ask the question, how silly the Company-Client relationship has to be to reach this bottom and for someone to allow this to happen without any consequences? What happened to the warranty, why is this eyesore not repaired and how come nobody cares? We may never know the answer, but this is what we can see:

1. Some company installed bird netting over the roof of the entrance thinking that it would prevent pigeons landing there. Mistake: Bird netting applied to horizontal surface without elevating the netting high enough; using 3/4″ mesh size, which is for sparrows/small birds. Even if the netting would be elevated it would look ridiculous on a flat, entrance roof top, it would show too much and pigeons would still be able to land on it, because the top of the netting would still be horizontal. Don’t think that pigeons cannot land on bird netting, they can! That’s why bird netting should only be installed vertically whenever possible. At completely exposed areas it would be fine to create a horizontal top, but at sheltered areas of a building – such as this on the photo – pigeons can land on the netting along the wall and continue to nest and roost.

2. We can see two more failed products on the photos: bird spikes and electric tracks with a solar charger on the wall. Mistake: Both products are installed inadequately and incorrectly. The ledge of the roof is probably very wide and we can only see one (half) row of spikes. This is imply not enough! Wide ledges require multiple rows and full surface coverage, otherwise pigeons can find foothold and land. For the electric track system installed we can only guess the same, not enough rows/coverage – we can see two pigeons hanging around in between all this mess. We can be sure that the electric tracks are there, because we can see the solar charger mounted on the wall, which powers the tracks. Unfortunately to no avail.

3. On the other side of the building we can see a fairly wide, recessed, steel ledge with needle-type spikes installed with pigeons nesting in them. These needle-type spikes are quite dense and sharp and as we can see on these photos they accumulate debris and nesting material very easily. Not to mention that they cannot be glued to the surface, only using mounting screws that penetrate the surface and cause leaking. But the bigger issue is that only one row of spikes were installed – as we can see on one of the photos – a pigeon is walking between the spikes and the wall.

At both areas either electric tracks or bird spikes could have been used effectively. Multiple rows of either product would have worked and from the aesthetic point of view the electric tracks would have been the ideal solution as they would not have shown at all. Due to their low profile and variety of colors available they are very hard to see.

Let me reassure you: Bird Netting works, Bird Spikes work, Electric Tracks work. If properly installed. Be sure to get product literature from your contractor before you make a decision and ask for manufacturers’ installation instructions. Read them and compare to the proposal from your contractor. Ask questions and at least a 2-year warranty, but 5-years should be no problem from a professional. Ask for references and visit the sites and see how the products look. A reputable bird control company should voluntarily provide these right from the beginning.

Christian Szabo is the founder and president of Pigeon Busters. With more than 22-years of experience he knows how to take care of your bird problems in a safe and bird friendly way. Reach him directly at christian.szabo@pigeonbusters.ca