GET A QUOTE TODAY →

Bird Wire deterrent systems are virtually invisible, but expensive. On ledges and sills they are impractical and ineffective at the same time. 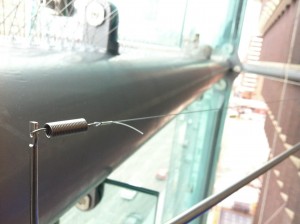 Bird Wire deterrent systems consist of vertical posts spanned with spring tensioned thin wires between them (similar to fishing line). These posts are drilled into the surface material and create potential for serious damage by water seeping inside, possibly freezing and damaging the material from the inside out. In some cases the posts can be glued to the surface, however the posts will eventually cave in irrespective of the type of adhesive used.

In most cases, even on an intact wire system, nesting can continue between the wires and the springs stretch overtime until become loose; rendering the entire system completely ineffective.

In defense of the wire system: when used with post clamps on smaller round pipes or railings (such as on the photo), they can be effective, but the system’s lifespan remains short compared to the spikes for example.

Some Coil Systems are based on a similar concept, but remain impractical and ineffective. Some manufacturers already discontinued these.

Read about some of our other bird friendly solutions:

Cleaning up the scene of the grime

Nowhere near as scary as they sound